Away In A Manger

Be near me, Lord Jesus, I ask Thee to stay
Close by me for ever, And love me, I pray.

Son John, four years old, came running into the kitchen, shouting eagerly, “Mother! Mother, you were wrong! There is a Santa Claus! Come quick.” He tugged at my apron. “You were wrong! I saw him on television!”

Of course I hurried into the den with him, and sure enough, right there on the television, you could plainly see Santa Claus hawking the latest model automobile! 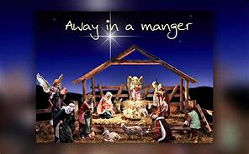 Another Santa, this one selling cereal. “Does this Santa look like the other one? Don’t look at what he’s wearing. Look at his face.”

Another channel, another Santa, this one admonishing children to be good, but he had dark hair and an English accent.

I could see the hope in John’s face gradually fade, as he realized his dream Santa Claus was actually several ordinary people in Santa costumes. But the dream died hard. It was so hard to give up thinking someone wise and strong and generous would come once a year and reward you for being good.

John learned that day that there is Someone who is wise and strong and generous, Someone who loves him so much that He stands by him all day, every day, every night, watching over him. He’s not just a midnight visitor, coming once a year to give a bit of candy or a lump of coal, depending on how good he’d been during the year. He is the Lord Jesus Himself.

Who was that Baby? The Lord Himself: creator and ruler of everything in the world. He’s sovereign, with such power and control that nothing, nothing, can touch that little four-year-old child of mine except through His divine love.

Who was that Baby? Jesus Himself: the Savior. The angel announcing His birth to Joseph told him, “You shall call His name JESUS, for He will save His people from their sins” (Matthew 1:21). That Baby came to earth to live a human life, and then to die for the sins of the whole world.
Like the Christmas carol says, I can’t help but responds to such selfless love:

I love Thee, Lord Jesus, Look down from the sky
And stay by my cradle Till morning is nigh.
Be near me, Lord Jesus, I ask Thee to stay
Close by me for ever And love me, I pray.
Bless all the dear children In Thy tender care
And take us to Heaven To live with Thee there.