Pushing the Envelope
A Wry Reminder from Elizabeth Rice Handford 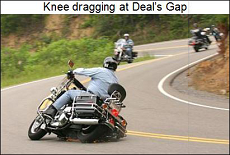 “Bikers like the challenge of curves, ” he answered, “and at Deal’s Gap you get 318 of them in a seven-mile stretch. The trouble is, riding with other bikers, you tend to ‘push the envelope,’ to see if you can’t do it faster than everybody else.”

I learned all about “pushing the envelope” when I was learning to fly. My instructor often said solemnly, as if my life depended on it (because it did), “Libby, fly within the envelope. Know and respect the numbers, runway length, weights and balance, miles per gallon of fuel-it’s all in the book. Know them. If you push against the envelope, if you try to make the plane do something it wasn’t designed to do, you’ll crash and burn, and that could ruin your whole day!”

Navigating a sharp curve on a motorcycle is difficult, John told me, because centrifugal force throws the weight of the bike to the outside of the curve. You counteract it by leaning in the opposite direction. But if you’re too fast, and if the curve is too sharp, your knee slider will scrape the road surface. That’s pushing the envelope. The foot peg is another protection. When it scrapes the road, you’re outside the envelope.

This happens in human relationships.

Isaiah 28:13 describes the process of yielding to the temptation, to “push the envelope,” in moral matters. It happens with such small increments, you’re scarcely aware of it. “Precept upon precept, line upon line, here a little, there a little, that they might go and fall backward, and be broken And snared and caught.”

A woman stole money from her employer, and didn’t get caught, so she stole a little more, each time promising herself she would pay it back. When she was caught, she told me, “I’m not a thief; I was going to pay it back.” But she didn’t even know how much money she’d stolen. She had pushed the envelope and it destroyed her and her family.

A man’s wife caught him with anothr woman. He said to me, “I don’t understand it. I’m not that kind of man.” But he had become “that kind of man” because he pushed the envelope.

A teenager slipped from out under his parents’ rules, tried the drugs his friends were using, but just a little. He didn’t intend to get addicted. But Proverbs 5:11-14 proved true for him: “Afterward you will groan in anguish when disease consumes your body, and you will say, ‘How I hated discipline! If only I had not demanded my own way! Oh, why didn’t I listen to my teachers? Why didn’t I pay attention to those who gave me instruction? I have come to the brink of utter ruin.'”

So how can you build good habits that will protect you from testing the limits? The same way as bad habits are formed. Isaiah 28:9,10 says, “For precept must be upon precept, line upon line, here a little, there a little. This is the rest with which You may cause the weary to rest, amd this is the refreshing.”

Walk safely, dear friend, as you hear, and heed, the voice of God showing you the right way.