God Is Still in Charge

The other day USA TODAY quoted John Kerry, President Biden’s special envoy for climate: “The Arctic is warming at a rate quadruple that of the rest of the planet. . . . We’re already seeing tipping points arrived at.” He added, “We’re also seeing the impacts in floods and fires and mudslides and the extraordinary heat, which is growing in various parts of the world.”

But the very same issue of USA TODAY quoted Professor Motohiko Murakami of Carnegie Institution for Science, as saying, “Earth’s interior is cooling much faster than previously estimated, prompting questions 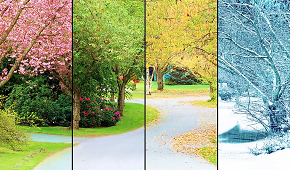 about how long people can live on the planet.”

Perplexing. Can both be true? Bemused by the conflicting reports, I opened my Bible to read that day’s Scripture. It was Genesis chapter 8, the chapter that recounts the end of the great flood and Noah and his family stepping out of the ark onto dry land. I chuckled out loud. It was as if God had tapped me on the shoulder. “Relax, Libby. I’ve got it all under control.”

Why should I not fret about global warming or earth’s core cooling? Because God made a promise to Noah (and to you and me) that day, and His promise still stands:

While the earth remains
Seedtime and harvest,
Cold and heat,
Winter and summer,
And day and night
Shall not cease. —Genesis 8:22

Then God put a rainbow in the sky as tangible evidence of His ability to keep that promise. As long as this earth exists, God said, the four seasons will come: spring and fall, summer and winter, and day and night. God designed this lovely universe. He spoke the word, and it all came into existence exactly as He planned it. He’s the One who keeps it running, day after day, night after night, millennia after millennia. Talk about “sustainability”! God invented it! Hebrews 1:4 says, “The Lord sustains the universe by the mighty power of His command.”

When God created this beautiful earth, He entrusted it to the care of human beings. Genesis 1:28 says, “Then God blessed them, and God said to them, ‘Be fruitful and multiply; fill the earth and subdue it; have dominion over the fish of the sea, over the birds of the air, and over every living thing that moves on the earth.’” So yes, we have a holy obligation to take care of it as best we can. The Scriptures are full of instructions to tell us how we must carefully tend it. But we also have to remember that this earth was cursed by the sin of Adam and Eve, and we must await God’s timing for it to be made new.

Meanwhile, God promises that while this earth remains, we will experience summer and winter, springtime and fall, and night and day.

Is the Arctic Ocean warmer than it was a century ago. Perhaps. Is the core of our earth cooling? No matter! They are both under God’s wise and infinite, powerful control! On this cold winter day, I can be glad: Spring is coming!

A Word of Thankfulness with Elizabeth Rice Handford