It’s almost a fairy tale, the love story of Kittie Jenneth and Fred Suffield. She had a lovely contralto voice and in the 1900’s was training for the concert stage in busy New York City. Kittie took a train from NYC headed for Ottawa. At that same time Fred was in his cabin in the Canadian wilderness, hunkered down to wait out a terrific snow storm. 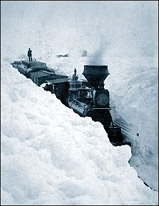 A frantic knocking at his door that night revealed a man desperate and cold. He’d come from a train stalled by the blizzard, and now the passengers were about to freeze to death. He’d risked his life to try to find help, and saw Fred’s lighted cabin.

Immediately Fred grabbed a lantern, and escorted all of the passengers to his small cabin for refuge until help could come. Kittie was one of his grateful guests. She wrote him a thank-you letter. He responded, she wrote back, he wrote back, and you can guess the rest of that story!

In Ottowa, after they married, they heard the Gospel in A. J. Shea’s church. They gave their lives to serve the Lord Jesus. They began an itinerant preaching ministry, going from community to community, she singing and playing the piano, and he preaching. They invited Pastor Shea’s young son to come with them for a week’s meeting to help in the services. But when he stood to sing, his voice cracked, and, in tears, he vowed he’d never sing again.

“The trouble is,” said Kittie quietly, “the song was pitched too high for your voice. Let me play it for you in a lower key.” She smiled and he sang-and that young man kept on singing for the rest of his life, until he died when he was 104 years old. You’ve heard of him: George Beverly Shea, who,in the Billy Grtaham crusades, sang before more people than anyone else ever had.

At a celebration of Beverly Shea’s 90th birthday, life, he sang:

Does the place you’re called to labor seem too small and little known?

It is great if God is in it, and He’ll not forget His own.
Little is much when God is in it! Labor not for wealth or fame.
There’s a crown-and you can win it, if you go in Jesus’ Name.

People were puzzled. Why would Shea chose such an unfamiliar song? Why? Because Kittie Suffield wrote it! Kittie was the unknown, unacclaimed person who, at a critical time in Shea’s life, helped him make a decision that not only altered his life, but brought the Gospel to millions.

Kittie is so unknown, I can’t even find a picture of her. I’ve told you all that seems to be known about her, except that she is buried next to Fred in Forest Lawn Cemetery in Los Angeles. How eloquently her life demonstrates the truth of the song she wrote: “Little is much when God is in it.” Wherever God has put you, whatever job you must do, no matter your seeming success or failures, if you do it in obedience to Him, your task is essential to His kingdom.

In Mark 9:41 Jesus said something so startling, we can hardly believe it’s true. But it is! Let this truth give you great joy today as you work today, even if it seems an insignificant, unrewarding task:

For whoever gives you a cup of water to drink in My name,
because you belong to Christ,
Assuredly, I say to you,
he will by no means lose his reward. Mark 9:41