The Criminal Who Didn’t Deserve Forgiveness
A Reminder from Elizabeth Handford that Easter Sunday is coming! 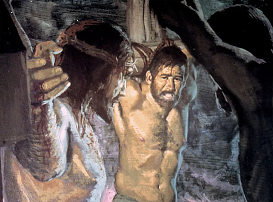 He might have been another Jim Jones or Ted Bundy or Timothy McVeigh for all we know, that man hanging on the cross next to Jesus. Whatever crimes he’d committed deserved death. He said so himself. The criminal on the other side of Jesus had berated Him, the Bible says. “But the other, answering, rebuked him, saying, ‘Do you not even fear God, seeing you are under the same condemnation? And we indeed justly, for we receive the due reward of our deeds'” (Luke 23:40,41).

This man will be dead by nightfall. He is terribly afraid to face God, he admits, because of his grievous sins. And there is absolutely nothing he can do to stop the inevitable.

He also knows that Jesus has been fraudulently charged. He had “done nothing amiss,” said the criminal. Even Pilate, the Roman governor, knew that was true. “You have brought this Man to me, as one who misleads the people. And indeed, having examined Him in your presence, I have found no fault in this Man concerning those things of which you accuse Him” (Luke 23:14).

The dying thief also knows, however vaguely, that Jesus is the Messiah, the King of kings, the One who will someday establish His holy kingdom on earth. And so he begs Jesus,

Remember me when You come into your Kingdom

Could a wicked sinner go to a holy Heaven? Yes! Incredible, but true. Philippians 2:5-8 tells us, Jesus “made Himself of no reputation, taking the form of a bondservant, and coming in the likeness of men. And being found in appearance as a man, He humbled Himself and became obedient to the point of death, even the death of the cross.”

Why would the Holy God condescend to lay aside His “Godness” to become a human being? So His death could pay for all of our sins! That includes the sins of the criminal dying next to Him. Because He paid the price of the thief’s sin, Jesus answered him,

Today you will be with Me in Paradise

Does that mean the man got to go to Heaven with Jesus without doing anything? He couldn’t join a church, or get baptized or confirmed, or give any money. He could not repay his victims. He couldn’t prove his sincerity or his faith by his changed life. All he could do is ask Jesus to remember him. And that was all that was necessary: he admitted his need, and he asked Jesus to meet it. Jesus wants to do the same for you. He says, in John 5:24,

Most assuredly, I say to you, he who hears My word
and believes in Him who sent Me has everlasting life,
and shall not come into judgment, but has passed from death into life

It’s as if there’s a line in the sand that you cross when you trust Jesus. When you accept God’s gift of salvation, your place in Heaven is guaranteed. You already possess it. You will never suffer for your sin. You have already passed from death into life. What a wonderful way to celebrate Easter!