My “Unguarded” Strength Made Me Vulnerable 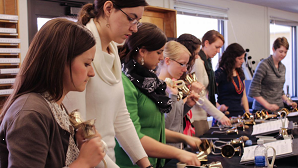 I didn’t want to join a handbell choir. I just wanted to see how good I’d be at it if I tried it. After all, I’d taken piano lessons for sixteen years, and I could “sight-read” a piece of music of moderate difficulty. So when a handbell choir came to our church, and the director invited us to try out the bells, I was delighted. They gave me the bell “A” to ring.

The woman standing next to me with her “G” bell noticed my eagerness. “You’ve done this before?”

The director raised his baton. “O.K., everybody, just to get started, let’s play a C scale.” The scale went nicely, until the director pointed to me, the one who was going to be “very good at it.” I swung my bell with a flourish like a professional. But did that “A” tone float gently out into the air? No. No “A.” No sound. No nothing. Why? Because I was holding my bell upside down. I was the only person in the room who missed the cue. Why? I was so busy bragging on how good I’d be, I hadn’t listened to the director’s simple instructions.

Oswald Chambers wrote. “Your unguarded strength may become your double weakness.” Remember Samson, the strongest man in the world, thinking his strength was invincible, tricked by a prostitute? Think about King David, a man after God’s own heart. He murdered his most loyal friend to hide his adultery. Peter, the apostle, bragged to Jesus that he would never, ever betray Him, but within a few hours he was swearing he’d never even known Him.

First Corinthians chapter ten lists the rebellious acts of the Israelites during their exodus from Egypt. They felt invulnerable because God had acted so spectacularly in their behalf. But then they committed every sin God had warned them about: gluttony, adultery, idol worship. So why does God tell us about those unsavory incidents of long-ago days? “Because,” He says, “all these things happened unto them for examples: and they are written for our admonition” (1 Corinthians 10:11). God continues with this warning::

Therefore let him who thinks he stands take heed lest he fall.
1 Corinthians 10:12

If I’m proud of my resistence to sin, I will be especially vulnerable to temptation.
But, thank God, He gives us more than a warning. He makes us a promise:

No temptation has seized you except what is common to man.
And God is faithful;
He will not let you be tempted beyond what you can bear.
But when you are tempted,
He will also provide a way out so that you can stand up under it.
—1 Corinthians 10:13 niv

I have never played with a handbell choir since, but the memory of that humiliation sometimes comes to mind when I’m feeling cocky. Yes, I will rejoice in the gifts God has given me, but I must never presume I am beyond failure. In matters so eternally important, I must always guard my strengths to keep them from becoming my weakness.