The dictionary says, “A snipe hunt is a practical joke in which the victim is left in a remote spot holding a bag for a fictitious snipe to run into.” The entry adds, “It can be a wonderful bonding experience for a father and child.” Uh? Really? 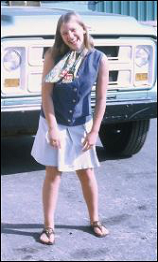 It was summer family vacation time for the Rice family at Grandad’s farm. All six aunts and their husbands were there with most of the 28 grandchildren. What a delightful time they had, riding the horses, playing charades, going to Rebel Maid for ice cream, swimming, singing around the piano, sleeping in sleeping bags in the old farmhouse or in the barracks.

Ruth’s daddy and the uncles got a wonderful idea. “We’ll go snipe-hunting,” they said in a mysterious whisper. Why didn’t the kids ask what they needed snipes for? Why? Maybe because they trusted their loving and dependable fathers? At any rate, after supper, they went out into the cow pasture, each armed with a grocery sack. “You hold these open, close to the ground,” the fathers said. “We’ll walk behind you, and make lots of noise, so the snipe will run into your paper bag. Go! Be the first to catch a snipe!”

So the children trustingly crept along the ground in the dark, eager for a little furry animal to scoot into their sacks. The fathers sauntered back to the barn to see how things progressed. After a long interval, a couple of the older kids realized there were no snipes. They’d been tricked. They loudly expressed their disappointment. The fathers were overwhelmed with consternation. How could they salvage this? They took the Babe Ruth candy bars they’d bought for the children’s late-night snack, and threw them into the open sacks. The kids, pacified, happily trudged back to the house—

A “bonding experience”? Not exactly. Two little girls felt betrayed, when their fathers had only planned something for their innocent pleasure.

Yes, the person you love the most will sometimes hurt you. Husbands disappoint wives, and wives their husbands, but usually not deliberately. Mothers and fathers don’t meet their children’s’ expectations, no matter how they love them, and children disappoint their parents. Spiritual leaders fail the people who trust them. And politicians certainly can’t keep the promises they make on the campaign trail.

Only the Lord God, your heavenly Father, can meet every need of your heart. Only He will never fail you. Only He is able to satisfy the deep hunger you have to be understood and still loved, loved with the compassion and wisdom of a perfect father. Psalm 145:16-19 says:

Fortunately, Ruth and her father already had a deep bond of love and respect between them that sustained them through the disappointment of the snipe hunt caper. Nevertheless, I doubt that Ruth will ever plan a snipe hunt for her precious grandchildren, Joseph and Zoe.