The Crazy Man Wasn’t So Crazy After All

A Word of Encouragement from Elizabeth Handford

“A crazy man lives there,” my girl friends would giggle as we passed a small house on our way to school every day.

The “crazy” man’s house was on West Seminary Street, just four blocks from our home in Wheaton, Illinois. The back yard was filled with a really odd contraption. You’d have guessed at its purpose because TV parabolas are familiar to you, but this was back in 1940. It was built of wood and iron plates, and could be tilted to scan different parts of the sky.

Grote Reber’s mother gave him a book on astronomy written by one of her former students, Edwin Hubble. (The Hubble Space Telescope is named for him.) That book ignited Grote’s passion for astronomy. 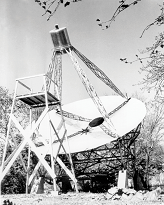 Reber built his monstrosity to catch radio waves from outer space, back when astronomers thought the Milky Way galaxy was the limit of the universe. Reber did something no one else had tried to do: he made a map of radio signals from outer space. Reber proved that those misty formations in the sky were actually other solar systems!

Historians say of Reber’s work, “Observing these longer wavelengths gave astronomers an entirely new window into the universe . . . Radio telescopes were the first to spot the rapidly spinning compact remnants of dead massive stars known as pulsars, the cosmic microwave background, light bearing the fingerprints of the Big Bang itself.”

“Bearing the fingerprints of the Big Bang”? Yes! Reber’s research gave scientists for the very first time a glimpse back to that awesome week God spoke our our universe into existence! His fingerprints are on His work. The stars really do sing, just as God said.

“Where were you when I laid the foundations of the earth? Tell me, if you know so much. Do you know how its dimensions were determined and who did the surveying? What supports its foundations, and who laid its cornerstone, as the morning stars sang together and all the angels shouted for joy?” (Job 38:4-7)

Yes, when God created this amazing universe, the “morning stars sang together” for joy, and we can hear their song even now through radio telescopes!

Why this convoluted bit of personal history? Because it wasn’t until years later I saw a picture in Time magazine of Reber’s backyard contraption and I realized he was not a crazy man after all. He worked ten years, holding a day job and working nights to accomplish what no one else believed could be done.

That should encourage you to hold onto your dream of accomplishing something good for God. Your dream may be to rear your children to love and serve God. You may have a dream of helping homeless people, or counseling young people through the rocky course of teen years, or teaching a Sunday School class of little children to love God, or creating a vaccine for malaria. Don’t give up the dream. I Corinthians 16:13,14 says,

Watch, stand fast in the faith,
be brave, be strong.
Let all that you do be done with love.

And while you’re standing strong and being brave, take time on an evening to step outside to see, and maybe hear, the stars sing together for joy in God’s creation.