The World’s Record for the Oldest Human Being, And Why It Matters

Guinness World Records says the oldest living human being is Kane Tanaka of Japan, aged 118 years. However, there is an incontrovertible record of a man, Methuselah, who actually lived until he was 969 years old!

His name in Hebrew could translate, “When he is dead it shall be sent.” It’s an odd name to give a baby, you’d think. But it turns out to be a truly important prophecy that reveals both God’s love and patience, and His justice that requires punishment for sin. Here’s why:

Methuselah’s grandson was Noah, who, you already know, built a big boat. The people who lived in Noah’s day were so wicked that God said He was sorry He’d ever 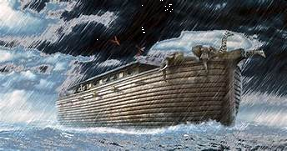 created them. (The story is told in Genesis chapters 6-8.) God would have to punish them if they wouldn’t turn from their sin. But “Noah was a righteous man, blameless among the people of his time, and he walked with God” (Genesis 6:9). When Noah was 500 years old, God told him to build an ark to save everybody who chose to come on board. God even waited for 120 years to send the flood, because He didn’t want anybody to have to die.
So for 120 years, Noah did three things:

> He built a huge boat, as big as an ocean cruise liner, exactly according to the specifications God gave him. Hebrews 11:7 says, “By faith Noah, when warned about things not yet seen, in holy fear built an ark to save his family.” Imagine how those wicked people taunted Noah for 120 years because no flood appeared!

> As Noah built, he also preached, warning people of their terrible danger. Second Peter 2:5 says Noah was “a preacher of righteousness.”

> Noah prayed for these wicked people, prayed so hard that God lists Noah, along with Job and Daniel as men in the Bible who were most fervent in prayer (Ezekiel 14:14).

So what does all this have to do with Methuselah’s Guinness World Record for living 969 years? As we said, Methuselah’s name could be translated, “After he is dead, it shall come.” What will come? The flood! Methuselah lived longer than any other man on earth because God didn’t want anybody to die in that flood. He waited a total of 969 years before He destroyed the earth with the flood, but saving all who wanted to be saved! Second Peter 3:9 says,

The Lord is not slow in keeping His promise, as some understand slowness.
He is patient with you, not wanting anyone to perish,
but everyone to come to repentance.

And that’s why it matters that Methuselah broke the Guinness World Record for longevity and lived for 969 years. That’s how long God patiently waited for the people He created with such love to turn from their sin to Him. That same gracious God still yearns over those who sin, just waiting for them to repent, so He can give them forgiveness and safety.