Thinking about the New Year with Elizabeth Rice Handford

Every New Year’s Eve my father, a pastor, encouraged the church family to make some fresh decisions, new choices, about how we’d change things in our lives in the new year. For several years, I remember, when I 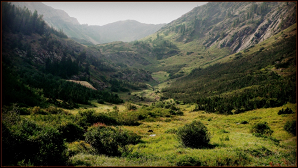 was in elementary school, my very first new year’s resolution was always “I will not talk to strangers.” (I had once talked to a very strange stranger, to my father’s consternation, and I sure wasn’t going to let that happen again!)

But often, as an adult following Christ, I’ve had to make the same old resolution again and again. It makes me leery of trying to set new goals, if I’m going to break them anyway, and then feel guilty the rest of the year!
A Scripture I read the other day shone new light on this for me. Since you may be plagued with the same discouraging fact, maybe this will encourage you.

In the book of Hosea God creates a real-life parable. God yearns over the people He created with such love and joy, but they rejected His love. He wants to illustrate to them (and us) that He offers forgiveness for our betrayal and depravity. So He tells His faithful prophet, Hosea, to go find a prostitute on the streets and marry her.

You’d think that such a command would be repulsive to Hosea, but instead, because he is a faithful servant who obeys his master, he woos the impure woman and marries her. She bears children, but she continues her sinful lifestyle, so some of the children were not Hosea’s. Then she leaves him to pursue her life of promiscuity.

But this real-life parable does not end there. God tells Hosea to find her and buy her back, and His obedient servant does so. This will show everyone who ever reads Hosea’s story how God loves us like a faithful husband loves an unfaithful wife. Hosea writes, “So I bought her back for fifteen pieces of silver and about five bushels of barley and a measure of wine” (Hosea 3:2). And that is exactly what our loving, forgiving God wants to do for us.

But then I will win her back [God promises] once again.
I will lead her out into the desert
and speak tenderly to her there.
I will return her vineyards to her and
I will transform the Valley of Trouble
into a Gateway of Hope.
She will give herself to me there,
as she did long ago when she was young. Hosea 2:14,15

So that’s what you and I must do as we face another year. We must confess our failures, yes, make them right as much as we can. Then we must enter the Gateway to Hope and live with the assurance of God’s everlasting love.

Oh, yes: one more thought. Suppose you break a resolution? Don’t give up and say, “I’ll try again next year.” Make it right today and keep on happily trudging down the road with the Savior who loves you so much He gave His life for you.