Was It the End of the World?

In the fall of 1958, Walt was asked to come to Podunk Center, Iowa, to preach in a evangelistic campagin for two weeks. (Yes, there really was a Podunk Center in those ancient days!) The four of us, Walt and I, with our two little children, John and Ruthie, were housed in a big farmhouse far out in the country. Iowa folks are outgoing, friendly people, and we felt that God was truly blessing our time with them.

One night, in the middle of the night, we were both awakened by an eerie, incredibly bright light shining through the windows. We ran outside in our night clothes, our hearts pounding in fear and clinging to each other. 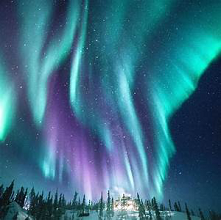 We looked into the sky, wondering what could possibly be happening. We stood in long shafts of green shimmering light reaching literally miles into the sky, with shafts of yellow and red dancing alongside them. Neither of us said a word. We stood transfixed. Was this the end of the world?

The lights finally faded, and then were gone. The darkness seemed even darker when those brilliant shafts of light disappeared. Still speechless, Walt and I made our way back into the house, both of us too deeply shaken for words. For a while it had seemed that the end of the world had certainly come, and that we were about to stand face to face with the God who had created us, to give Him an account of our lives here on earth.

It was as serious a time as I had ever faced in my life, I think. I was deeply concerned to make sure that my relationship with God was based on real truth, not some imaginings of my own heart or the opinions of others.

I turned in my Bible (my one sure source of truth) and read what Jesus said in John 5:24:

Most assuredly, I say to you,
he who hears My word and
believes in Him who sent Me
has everlasting life,
and shall not come into judgment, but
has passed from death into life.

I rested in the plain statements, “has everlasting life,” and “shall not come” and “Has passed from death to life.” It was an accomplished fact. I had heard God’s Word. I had believed. I had everlasting life. So again, I settled that my sweet relationship with God was not on the basis of any promises I made to be good. I’ve failed at that, too often! I certainly hadn’t earned His love. I hadn’t earned His forgiveness. But because He loved me and sent Jesus to pay for all my sins, I could face the end of the world unafraid, because my Judge is also my Savior.

My Creator, my Judge, is also my Savior.

As you no doubt have guessed, that night we saw the aurora borealis, the northern lights. It was a stunning display, seldom seen in latitudes as far south as Iowa. Those shafts of light had reached 50 to 80 miles into the sky! No wonder we were overwhelmed. They are a magnificent display of the glory of God. But, thank God, the Creator who made them also wants us to live with Him in His glory forever. He’s made the way so we stand before Him uncondemned and unafraid. Yes! Even at the end of the world!