Who Gets to Throw the First Rock?

When I was four years old, I decided that by the time I was ten years old, I would be able to be good. I wouldn’t steal the neighbor’s baby rabbit from its cage again. I wouldn’t hide change from the quarter when Mother sent me to the store for a loaf of bread again. Listening to Daddy preach on the radio, I asked Jesus to come into my heart and forgive all of those bad things. Yep, I’d be a really good little girl by the time I was ten years old.

But when I was ten, I had another list of the really bad things I’d done. O.K.,when I’m really old, when I’m twenty, I’ll have all that bad stuff licked. 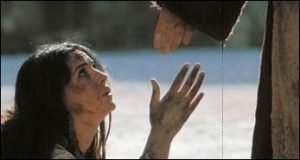 When I was forty, I lowered my sights. When I’m really, really old, I’ll be immune to temptation.

Yes, you’ve guessed it: in my nineties, I haven’t conquered temptation. Isn’t it time for me to rest in God’s forgiveness? Until I stand in God’s presence, redeemed and made holy by Jesus’ sacrifice, I will be tempted.

Why, you may ask, make this embarrassing confession of failures? Because, too often, I hear people criticizing others unmercifully. I hear angry, accusatory voices on every side, sharp, bitter accusations that leave no room for tolerance. Often they are about trivial errors of judgment. But how quickly the criticisms are picked up by other people. Often, a person is fired because of a single, unsubstantiated accusation. I hope you know I’m not begrudging the really serious charges of assault or rape that must be condemned. I’m thinking of ordinary people whose lives have been damaged because someone dug up a picture of a costume worn twenty years ago. Someone gossiped about an unthinking response to an unexpected question. Often the criticism came simply because someone faithfully stood up for their faith in God.
Do we Americans actually have two standards of conduct? Do we expect perfection of others, always, without exception for circumstances, or youth, or culture? Are accusers immune from judgment?

Have you ever been so angry you wanted to throttle someone? Ever told a lie? Ever wanted something someone else owned so badly you could taste it? Ever stolen? Ever looked at pornography? Then welcome to the Egalitarian Club for Sinners. It isn’t an exclusive club for the elite; it‘s for everybody. Every human being already belongs to it. God says so in Romans 3:23: “For all have sinned and fall short of the glory of God.”

The Scriptures tell us of a time some Pharisees dragged a woman to Jesus. They had caught her in the very act of adultery. (Hmmm — why didn’t they bring the man involved? He was just as guilty.) What would Jesus have them do with this harlot? John 7:3-13 tells the story.

As the men shouted their accusations, and the woman huddled in a heap in shame, Jesus stooped down and wrote something in the dirt. Finally He stood up. “O.K. She’s sinned. She deserves to be stoned. Of course, if you’ve ever broken any law of God’s. we’ll have to stone you, too. If you’re without sin, you can throw the first rock.”
All the woman’s accusers crept away in shame. Of course. They were all sinners.
His voice full of compassion, Jesus asked the woman, “So no one accuses you?”
“No one, Lord.”
“Then go—and sin no more.” And she went away, forgiven.

When Jesus forgave her, He wasn’t condoning her sin. He was just reminding us to be careful how we judge. In Matthew 7:2, Jesus says,

For with what judgment you judge,
you will be judged

What a sobering thought!

A Word of Encouragement from Elizabeth Handford