Why Doesn’t God Do Something? 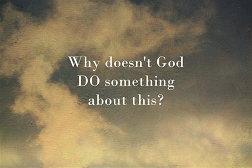 The child was bullied at school. When he protested to the teacher, she labeled him a troublemaker, and disciplined him instead of the bully.

A co-worker made a costly mistake, but blamed her innocent office-mate. She was fired and never vindicated.

A man spent his whole life in prison on a murder charge. Eventually investigators proved someone else was guilty. The large restitution check the state paid him didn’t give him back his ruined life.

A woman, angered by her pastor’s plain sermons against sin, made an anonymous accusation of sexual abuse against him. The innocent minister was fired and reviled. There was no way he could refute an anonymous, vague charge.

These things happen regularly to innocent people, people living godly lives. Why doesn’t God do something? If He is really sovereign and ruler over all the earth—and He certainly is—why doesn’t He avenge people who’ve been wronged? He has the power and the wisdom to do so. He’s proved He loves us “to the bitter end,” by dying on the cross for our sins (John 13:1). So why doesn’t He vindicate good people wrongly accused?

The Apostle Paul ruefully said, “If in this life only we have hope in Christ, we are of all men most miserable” (1 Corinthians 15:19). But then he writes, triumphantly, “But Christ is risen from the dead!” (verse 20). Because Jesus lives, every wrong will some day be righted. As hard as it seems, God hasn’t forsaken us when we are mistreated. It’s just not time yet. God’s wonderful plans for us will not be completely fulfilled until we meet Him in eternity.

This life is the foyer, the prelude, for the life God has promised those who trust Him. Our lives will not end at death. The ultimate, eternal life, awaits those who accept God’s gift. It’s true, as First Timothy 5:24 says, “Remember that some people lead sinful lives, and everyone knows they will be judged. But there are others whose sin will not be revealed until later.” Sometimes people, in this life, get away with murder—but not forever. God is still sovereign.

Hebrews chapter eleven is the story of Christians through the years who believed in God, but died without receiving what God had promised them. Why? Because He has a better plan for all of His children. Hebrews 11:39,40 says, “All of these people received God’s approval because of their faith, yet none of them received all that God had promised. For God had far better things in mind for us that would also benefit them, for they can’t receive the prize at the end of the race until we finish the race.”

For example, the influence of godly parents doesn’t end when they die. Their sweet example can influence future generations. So their reward must wait. But the reward is worth the waiting. Revelation 21:3-5 describes it:

God will dwell with them, and they shall be His people. God Himself will be with them and be their God. And God will wipe away every tear from their eyes; there shall be no more death, nor sorrow, nor crying. There shall be no more pain, for the former things have passed away.
Then He who sat on the throne said, “Behold, I make all things new.” And He said to me, “Write, for these words are true and faithful.”

Yes, our God is still Sovereign. He hasn’t forgotten His promises. Some wonderful day soon He will make everything right.